For some decades now, an emancipatory movement has been questioning the gender binary of man and woman along with the associated gender stereotypes and role expectations.

With regard to physical sexual characteristics, some people cannot be clearly assigned to the male or female sex. The term intersexuality refers to a broad spectrum of variations in sexual development with different biological causes, including sex chromosome variations or genetically caused particularities at the hormonal level. Many intersex people strongly oppose the prevalent pathologisation of their individual sexual characteristics. Their criticism of surgical gender reassignment or assignment, which used to be routinely applied as early as infancy, has led to medical guidelines now stipulating that such and similar (e.g. hormonal) procedures should generally only be carried out with the consent of those affected. The possibility introduced in Germany in 2018 to specify the gender of a new-born child as “diverse” in civil status entries also strengthened the rights of intersex people.

Even if the sex seems obvious in view of the physical characteristics of an infant, at any point in time of the individual’s later development the perceived gender identity can come into conflict with the sex assigned at birth. Such a gender incongruence may (but need not) involve discomfort with one’s own body. It can also relate to one’s expected public appearance, sexual orientation or other aspects of gender roles. The strategies chosen by those affected to reconcile with the particularities of their gender identity are correspondingly diverse. In cases of severe suffering, the above-mentioned surgical and hormonal gender reassignment procedures may offer a solution. However, difficult ethical problems arise when children or adolescents desire such treatments, because these can have serious sequelae and because gender identity may change in the course of growing up. 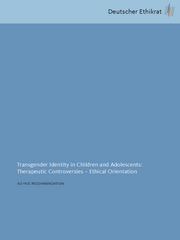