About one million people with dementia are currently living in Germany. According to forecasts, up to 1.7 million people could be affected by 2030. Dementia is not only a challenge for relatives, physicians and nursing staff, but for society as a whole. Self-determination is an essential part of people’s self-conception and is a central point of reference in ethical discourses. For a long time, the focus was primarily on the deficits associated with dementia – with the result that many people with dementia felt exposed to inappropriate paternalism after diagnosis. They were often talked about and rarely talked to. It is, however, ethically imperative to meet the affected persons themselves and to respect their self-determination even when it is limited. There are now increasing efforts to focus on the capabilities of people with dementia. Possibilities are examined to better perceive their will and to support and respect them in their self-determination and ability to express themselves. 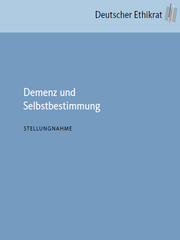